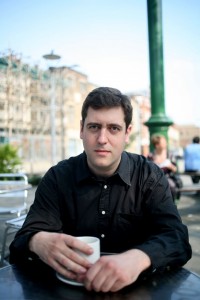 Forwards and Back in York

Next week’s recital in York (6th April) looks back from the present day, surveying the early twentieth century with an outdoorsy theme, after some of the best of “Now”. I’ll start by revisiting David Power’s settings of De La Mare in the cycle Peacock Pie. I first sang these affectionate homages to childhood in a Late Music recital with William Vann. This time, Elizabeth Mucha takes on the challenge of David’s perpetuum mobile accompaniments. Then come newer settings of Helen Cadbury by Steve Crowther (and do come to the pre-concert talk about Helen), plus a world première from Hayley Jenkins, Wrong Jacket. Seeing me counting the rhythms and negotiating the costume change simultaneously will be worth the cost of admission alone.

The Songs Now CD (Meridian) is the link for the final set in our first half. There are cryptic offerings from Richard Whalley, Power again, and David Lancaster, followed by the unusual post-romantic William Rhys Meek, the hard-hitting Crowther song Junkie, and Michael Parkin’s riot of an e e cummings setting, She being brand new.

Elizabeth introduces our second half:

“The marvellously descriptive setting of Thomas Nash’s poem, ‘Spring’ from the ‘Five Elizabethan Songs’ composed in 1914 by Vaughan William’s pupil, Ivor Gurney, opens the 2nd half.  More seasonal fare is served up with Gurney’s ‘I Will Go With My Father a-Ploughing’,  a flowing lyrical setting which captures the mood of the changing of the seasons. Gurney returns to a more traditional four-square interpretation in ‘Down by Salley Gardens’ as does Benjamin Britten in The Foggy Foggy Dew. This group ends with a witty setting by Britten of ‘The Plough Boy’  – in a few short pages we see the transition of a simple country boy into a ‘Politician’ who describes himself as ‘a great man’!

We end the recital with the cycle, ‘Songs of Travel’, by Ralph Vaughan Williams with poems by Robert Louis Stevenson. Inspired by early Romantic song cycles which took their inspiration from unfulfilled longing coupled with seeking one’s destiny alone in nature, Vaughan William’s cycle was hugely influential for a whole generation of budding English composers and has come to represent the very best in Victorian English Song.”

It was a delight last month to sing with Opera Circus again, making a demo recording of Nigel Osborne’s community opera, Silent City. This collaboration with the people of Matera in southern Italy uses melodies improvised by the youngest and oldest members of the community there. The story involves the area’s famous caves, where some of the living still recall growing up. It’s great that Nigel is still making his gifts available to the widest possible audience! Find out more about the piece here.

I was pleased to be asked to take over a recital in this innovative series, which presents contemporary classical music on the first Saturday of the month in the York Unitarian Chapel. The policy is to programme only living composers, which gave me a great opportunity to spring-clean my recital repertoire, involving composers whose work I have long been fond of, such as John Adams, Thomas Adès and Henri Dutilleux, delving into the oeuvres of Jonathan Harvey and Marc-Anthony Turnage, and introducing Graham Ross, a young gun, so to speak.

As part of the York Songbook project, the concert also includes collaborations between composers associated with Late Music and York Literature Festival Poets. I knew much more about them once my accompanist, William Vann, and I had been able to spend time on them together, but even at the outset the process of singing them in revealed a great variety of texture and nuance amongst these works. The preparation of this evening was a huge undertaking, which made me all the keener to find other opportunities to sing this repertoire.

Differences in Demolitions in Srebrenica and Vienna

Having lain fallow for a couple of years after a tour of Scotland, the Opera Circus production of Nigel Osborne’s opera on Bosnian themes, Differences in Demolitions, finally made it to Srebrenica, a good three years after the company was first scheduled to work there. We spent three days working on Nigel’s wonderful score – a concoction of wistful folk tunes and hardcore modernism that gives an immediate impression of the man himself and all his fascinating interests, both musical and political.

Practically speaking, the visit presented more than a few challenges: Srebrenica is not really set up for the visitation of NGO representatives and diplomats, nor to the demands of international musicians. The main problem was heat – the lack of it – although you wouldn’t have believed it from the weather when we arrived, when the scirocco was blowing and the air was far warmer than the ground. However, once it started to snow we got one of those insights you hope not to have into how life must have been in the old Eastern Bloc.

The Srebrenica Cultural Centre is a concrete edifice of dubious architectural merit, but of great importance to the town; I think it may be the coldest place I’ve ever sung in, including Merton College Chapel in Oxford, which is saying something. Nevertheless our welcome was made all the warmer by entertaining evenings in the company of Srebrenicans young and old, who also received our performance with enthusiasm. Some of the younger cohort came with us on the bus to Vienna. Yes, you read that correctly, we went overland: just the fourteen hours door to door, but it was worth it when we got to sing in the Hofburg, a magnificent palace and quite a contrast from the previous week. There’s something about this company and its work that keeps me coming back for more.

Read all about the composition of this unique work, and the first performances in Bosnia, in my blog, A baritone in Bosnia.

Find out details of forthcoming performances at the Opera Circus website.

An educational project with a scientific slant, Darwin’s Dream saw me sporting the most distinctive facial hair I’ve ever needed for a role. After extensive trial and error it proved best to grow a whole beard and take out the middle section, leaving myself with huge sideburns that aroused plenty of comment from those not in on the secret.

The work incorporates sections of improvised composition from local schools, plus an onstage choir of young people singing songs and carrying the main narrative. As Darwin, I was one of three operatic principals: Andy Morton played Joe the Fossil Hunter; and Katherine May, as the DNA-obsessed Dr Evelyn, channelled Mozart’s Queen of the Night for all she was worth. Add in the professional instrumentalists of the Fibonacci Sequence under the direction of Patrick Bailey and you can imagine the lightly controlled chaos that ensued in rehearsal, before it all came right on the night.

Darwin’s final lines reminded us that we were all connected and that life on earth deserved our protection; if that message got through to only a few of the audience and performers the sporting of outrageous sideburns will have been totally worthwhile.

Having worked for John Fulljames before, I was expecting the stagecraft of The Birds to be fairly demanding. I was not prepared for moving around three differently angled rakes, wearing a mask with no actual eye holes, plastic wings flapping behind me. I should have known, really, because my previous outing with them had been Peter Maxwell Davies’ The Martyrdom of St Magnus, which had involved trying not to tread on monitor cables in the dark while shining a torch in one’s own face.

The director has a penchant for risk and an ability to create exciting performance from unpromising source material, like Per Norgard’s birdsong fantasy D’Monstranz Voegeli, or Clement Jannequin’s programmatic chanson Le Chant des Oiseaux. Both of these acted as curtain raisers to a new version of Aristophanes’ The Birds, with music by Edward Hughes, and snappy updated text by Glyn Maxwell.  John’s idea had been to present a consort on stage in a modern-day response to Monteverdi’s style of writing, and I Fagiolini, of whom I became a temporary member, were the ideal choice to make his vision a reality.  Find out more at the Opera Group website.